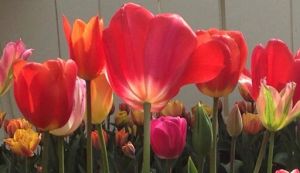 “Where is everybody going?” my 91 year old mother-in-law asked, her forehead furrowed.  “And why are they in such a hurry?”

What a profound question.  Where is everybody going, and why are we racing as if the world would crumble if we slowed down?

For a woman who dropped out of seventh grade to work on the farm and help raise her siblings, Dorothy had loads of wisdom.  But then again, wisdom and education don’t necessarily reside in the same person.  What would  happen if we slowed down and re-evaluated what is most important?

Out of the corner of my eye, I noticed her gnarled fingers and thought of the years Dorothy picked sugar beets to help feed the family.  Those same hands milked cows and clutched the reigns of horses as she drove the horse and buggy to town; hands with a rich, colorful history.

I was driving Dorothy to Top Foods for candy to turn her kitchen into a gingerbread house mini-factory.  The store showcases dozens of glass columns from floor to ceiling. Candy of every shape, size, and color fill the columns. Dorothy magically transformed it into roofs, windows, siding, chimneys, sidewalks, and fences for her little gingerbread masterpieces. Then she turned tiny toy babies into snow-suited kids riding sleds and ice skating outside the houses.  She certainly gave Christmas magazines a run for their money.  The end result melted peoples’ hearts as they slipped into the glorious winter wonderland created by the hands of Dorothy Michehl.

I walked down the hall into Dorothy’s room at the lovely adult family home, where she now receives hospice care at age of 95.  I sat beside her as she slept, noticing her hands resting against her cheek and pillow.  The beautiful, swollen, arthritic hands that once created a lovely garden.  Bridges, a pond, a small waterfall, and a natural stream kept the hundreds of flowers and bushes company through the years outside her simple home.  The same hands had managed a private food bank for fifty people out of her home. Dorothy had received an award for Volunteer of the Year at the age of 85.  Such beautiful hands that loved well for close to a hundred years.

Outside her room, I heard people laughing, which reminded me of Dorothy’s hearty laugh.  I remembered when I was in graduate school and my sister-in-law, Joan, visited from Chicago.  She asked what subjects I was studying and I mentioned several, including Sexuality in Marriage.  After a few seconds, I apologized to Dorothy because I thought she might feel uncomfortable.  She said, “How do you think I ended up with four kids?!”

After reminiscing a while, I realized she would probably sleep most of the day and got up to leave. I quietly squeezed one of her beautiful hands.  I walked down the hall and said goodbye to the man and his mom, still sitting near the Christmas tree.  His sacrificial love reminded me of the sacrificial love of Jesus, our Lord and Savior.  He came to earth, wrapped in humanity and later died on a rugged cross to pay the price for our sins.  He is the reason for true peace and joy.

I pray we all stop to reflect on Dorothy’s profound wisdom:  “Where is everybody going, and why are they in such a hurry?”  May you have the gift of sitting in silence, thinking about where you are going and if you’re moving too fast.